Set alongside their demand forecasts, the DTTAS Review identifies the main capacity constraints for Dublin Airport, when these constraints are likely to take effect and the nature and scale of additional infrastructure that will be needed to alleviate the expected capacity constraints to 2050, including the potential need for a third terminal. However, the review also focuses in some detail on known or anticipated short to medium term constraints up to 2030 and reconfiguration, operational efficiencies and additional infrastructure that are required to be addressed within that period. It is primarily this short to medium term perspective and the need for urgent investment to facilitate future growth during the plan period that has informed the preparation of this LAP.

3.2.1 CAPACITY CONSTRAINTS DURING THE PLAN PERIOD

The most immediate capacity constraint affecting the Airport is that of congestion of the surface access to the Airport. Chapter 8 of this LAP relating to surface access sets out that mode split in favour of public transport, traffic management enhancements and improvements to key bottlenecks in the circulatory system within the Airport campus and key access roads as per the requirements of the South Fingal Transport Study 2019 will resolve this matter. Following on, internal congestion points in the terminals and aircraft stand capacity require resolution during the period of the LAP.

Primary strategic road access to Dublin Airport is from the M50 via the M1 motorway. Road access to the Airport is heavily dependent on the M1 Spur route and existing R132 airport roundabout. The existing airport internal road network consists of a one-way system. The one-way system splits in two with the southern route serving Terminal 1 and its multi-storey car park, and the northern route serving Terminal 2 and its car park.

The Ground Transportation Centre [GTC] functions as the key public transport focal point for bus set down and pick up associated with numerous public and private bus operators that operate across local, regional and national areas within the Country. It is envisaged that the future Metrolink station to serve the Airport will be integrated with the GTC to form a public transport interchange. More detailed analysis of existing and proposed transport provision is set out in Chapter 8 Surface Access and Transport of this LAP.

Maintaining appropriate levels of access to the Airport in order to ensure it fulfils the strategic function as the primary gateway to the Country is an objective of the National Planning Framework and supporting plans. In order to effectively balance the demands of increased passenger numbers on the surface access infrastructure, a strategic review in the form of the South Fingal Transport Study was carried out by Fingal County Council. Prioritisation of investment in transport supply to meet the short and longer term needs of projected increases in passenger numbers in Dublin Airport formed part of the scope of the study. A specific section of the study deals with the issues relating to current and future surface access at Dublin Airport.

The surface access options available to avoid constraints to growth of passenger numbers at the Airport are provided in detail within Chapter 8. In brief, while the modal split for the Airport has improved in terms of public transport and taxi use, increased access by private car to the eastern campus will negatively affect the existing strategic motorway network. This must be resolved through a number of measures including provision of infrastructural responses in addition to measures to reduce existing and future private transport movements to the eastern campus.

The existing provision of footpath facilities is generally of good standard within Dublin Airport. Covered walkways and dedicated footpaths have been provided to encourage walking within the Airport grounds and provide connection between terminals, public transport nodes, car parking spaces and offices. Dedicated signalised pedestrian crossing locations are provided at all major road crossing points. Other busy pedestrian-vehicle interaction points are designated as zebra crossings with provision of dropped kerbs along the primary pedestrian desire lines. The upgrade to the internal road system within the Airport included a significant investment in cycle facilities particularly on the approach routes into the Airport from the R132. The cycle facilities serve both the terminal buildings and also many of the employment centres located through the Airport and environs. The R132 upgrade included improvements to the cycling environment along this road. Chapter 8 of the LAP promotes an increased modal split towards walking, cycling and public transport with improvements in the cycle network on key routes serving the Airport from the city centre and Swords.

Car-parking facilities comprise a mixture of short and long-stay car- parks, with carparks under the control of daa and private operators. More detailed analysis of car-parking provision is set out in Chapter 8 of the LAP.

While the issue of car-parking is dealt with in more detail in Chapter 8, parking provision plays a significant role in accommodating and fostering use of private transport to access the Airport, both for passengers and workers. Decoupling growth of car use from passenger and staff increases is important to avoid unnecessary strain on the existing and future surface access infrastructure.

The terminal buildings are part of the core infrastructure for Dublin Airport facilitating inter-modal change for travellers. The building facilitates the departure and arrival passenger processes including Check-in, Security, Boarding Gates, Immigration, Customs, Meet & Greet and Retail and Food & Beverage.

Dublin Airport has two passenger terminals, Terminal 1 (T1) and Terminal 2 (T2). T1 opened in 1971 and has been refurbished, extended and improved many times over the last two decades. In 2009, a new extension featuring new food and retail outlets was added to the side of Terminal 1, which has also seen substantive pier development as a response to gate shortages.

T2 was opened in 2010 and Aer Lingus is the main carrier operating within this terminal. Since its opening, T2 has begun to develop as a hub primarily associated with flights travelling between Europe and the United States as a result of Irelands geographic location and the US pre-clearance immigration facility.

The current permitted combined passenger capacity for T1 and T2 is 32 mppa34. Based on current 2018 passenger numbers, the 32mppa capacity is approaching. The DTTAS Review identifies prospective capacity deficiencies as having the potential to limit throughput of departing and arriving passengers processed through T1 and T2. There is, however, sufficient space within the existing terminal infrastructure of T1 and T2 to accommodate short to medium term growth to 40mppa subject to the reconfiguration of different parts of the terminal processing areas to alleviate bottlenecks (arrival, departure processing facilities, immigration, baggage reclaim and US pre-clearance facilities). The DTTAS Review recognises that this kind of incremental expansion of T1 and T2 throughput is desirable to relieve the capacity issues identified in the short to medium term. This issue of a prospective third terminal is discussed in more detail in Chapter 7 Airport Infrastructure of the LAP. 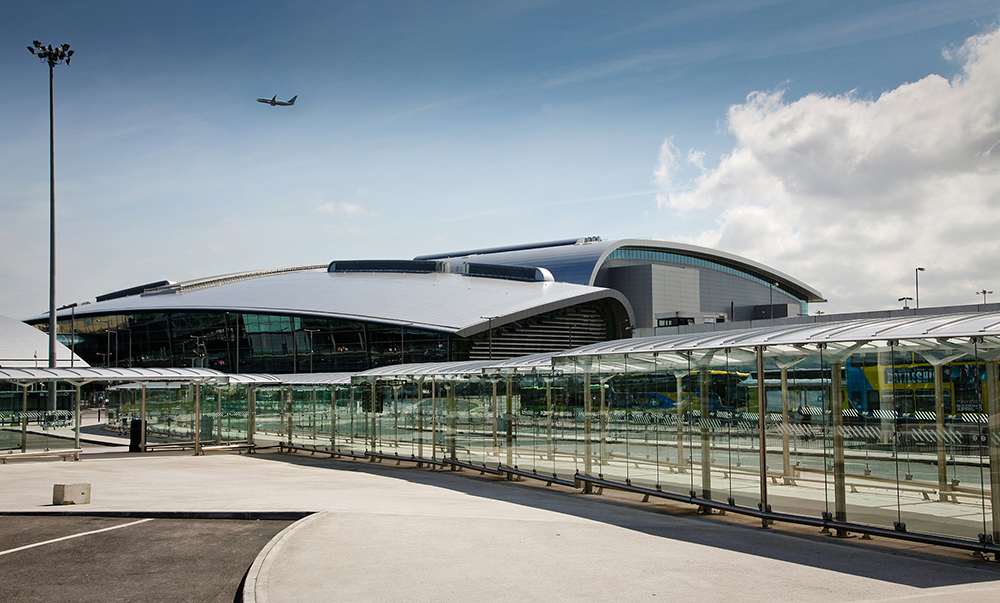 Runways 10R/28L and runway 16/34 make up the existing runway configuration at Dublin Airport. Runway 10R/28L which provides the principle east-west runway is located within the southern section of the Airport lands. The vast majority of the 31.5 million passengers in 2018 arrived and departed on this runway which is configured with supporting taxiways and Runway End Safety Areas (RESAs).

Runway 16/34 (the crosswind runway) traverses north-west-south- east close to the Old Central Terminal Building (OCTB). This runway is currently used only occasionally, either when there are strong crosswinds or in departure-only mode during peak periods to alleviate the build-up of delays.

The DTTAS Review identifies that the principal runway, even with the temporary relief offered at the busiest morning periods by the crosswind runway is operating at capacity in the scheduled morning and evening peak hours. The addition of the new north runway currently under construction and due for completion in 2021 and operation in 2022 will provide for additional capacity.

The existing taxiway system facilitates the safe and efficient movement of aircraft to and from aircraft stands serving T1 and T2 to/from the existing runways. The main runway 10R/28L has a parallel taxiway and a number of Rapid Exit Taxiways (RETs) and a major holding point where aircraft can be brought forward in the optimum sequence for departure. To respond to the demand of ATMs forecasted in the DTTAS Review, upgrades to the existing taxiways may be required to cater for growth in air traffic.

The apron is the area between runways/taxiways and terminal gates and where aircraft are parked, unloaded or loaded, refuelled, or boarded. Aprons also serve cargo operations. The majority of apron areas at Dublin Airport are located within the eastern campus of the Airport and serve passenger traffic. The apron to the west of runway 16/34 is currently used for cargo planes and aircraft parking. To respond to the demand of ATMs forecasted in the DTTAS Review, upgrades to the existing aprons may be required to cater for growth in air traffic.

An aircraft stand refers to a designated area on an apron intended to be used for parking an aircraft. Currently, Dublin airport offers a number of both contact and remote stands, which have been developed over a protracted period, in-response to different airline and ground handler requirements. Dublin is therefore equipped with both air-bridge served and walk-in walk-out stands, the combination allows for different standards of service quality which are then reflected in charges to the airlines using them. For the purposes of passenger flights operating from a remote stand, passengers board a bus at a bus lounge for transport to the stand. The DTTAS Review indicates significant increase in stand capacity is required at the Airport with between 39 – 89 new stands required up to 2050.

A boarding gate is an area of an airport that provides a waiting area for passengers before boarding their flight. A gate may directly provide access to a plane served by an airbridge or by stairs/ escalators/elevators or by boarding a bus for transit to an aircraft parked on a remote stand. The DTTAS Review indicates a need for up to 18 new boarding gates within Terminal 1 and 2 – 4 gates for T2 up to the period 2050.

A pier is a small, narrow building with aircraft parked on both sides and is connected to the terminal building. The existing piers at Dublin Airport include Piers 1, 2 and 3 connected to Terminal 1 and Pier 4 connected to Terminal 2. Pier 4 offers US pre-clearance processing facilities. A satellite pier located to the south-east of T2 currently serves this terminal. To serve upgraded and additional aircraft parking stands, changes to the pier buildings which accommodate boarding gates may be required. 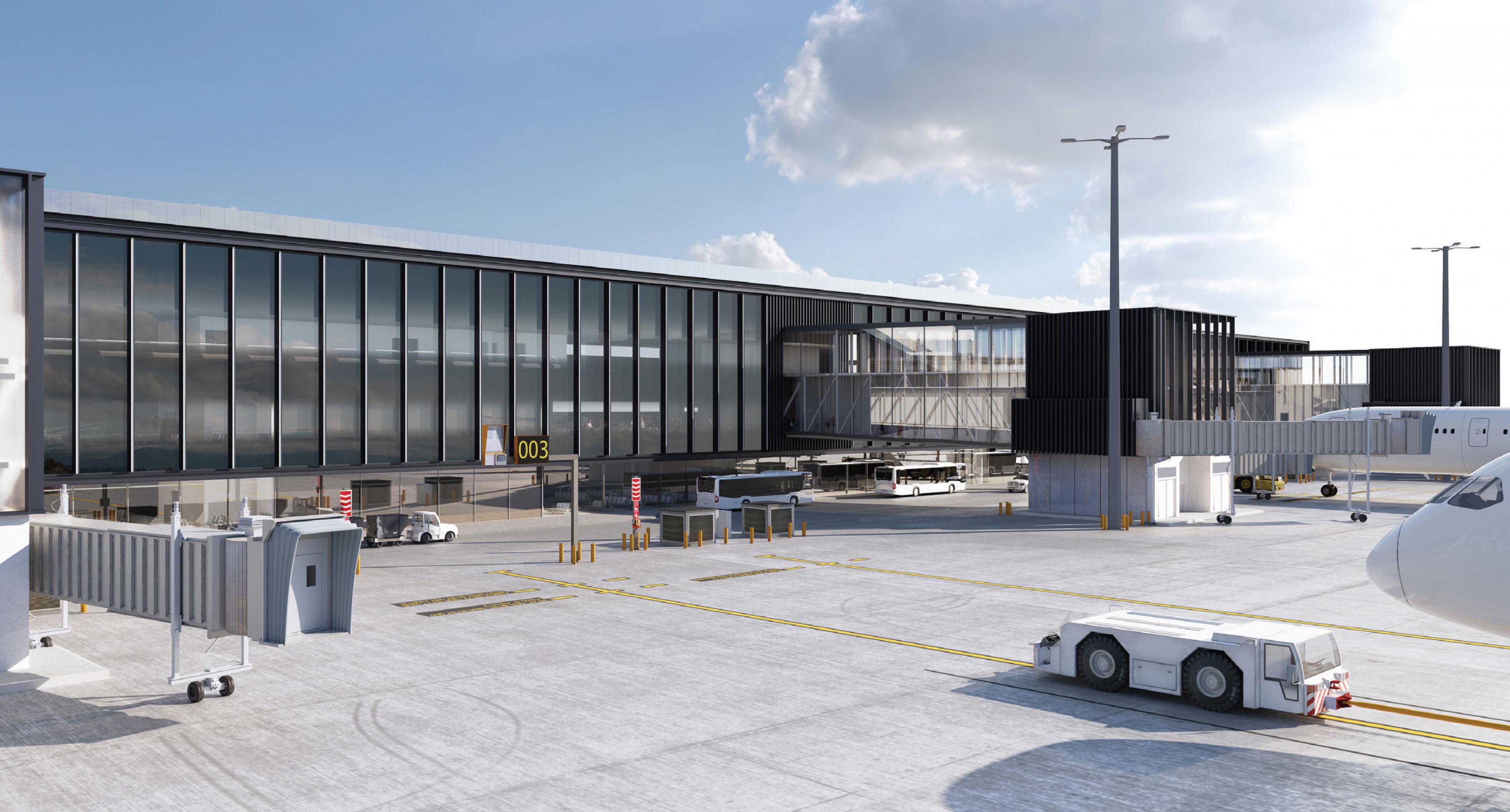