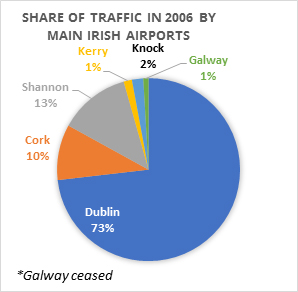 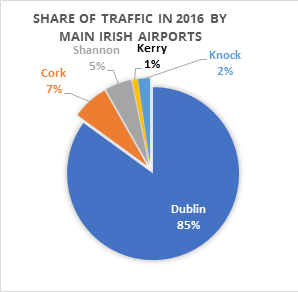 Since 2010, Dublin Airport has witnessed an extended period of strong passenger growth as part of Ireland’s post-recession recovery as illustrated in Figure 7, Dublin Airport Passenger Numbers 2006 - 2017.

The average number of passengers carried per aircraft movement has also increased, continuing the trend that has seen larger and more modern aircraft types used at the airport. With the growth plans of both Aer Lingus and Ryanair, this recent momentum is expected to continue – at least in the short term. Thereafter potential capacity constraints or the impacts of Brexit make the longer-term picture less clear.

In total, Dublin Airport is served by 63 scheduled passenger airlines flying to a comprehensive range of short haul and long-haul destinations (around 180 in 2017 if both scheduled and charter services are also included). UK destinations account for 38.4% of all departing seats from Irish airports in 2017, with the links from Dublin to London’s Heathrow and Gatwick airports the largest by departing capacity, and Manchester and Birmingham also substantive.

In addition, there is also evidence of increased interlining at Dublin, up from less than 1% five years ago to nearly 3% of departing seats in 2017. Dublin also offers smaller UK regional airports a hub link between the UK and North America. Based on these trends, recent evidence suggests that Dublin will continue to grow, provided additional capacity is available to support this growth. 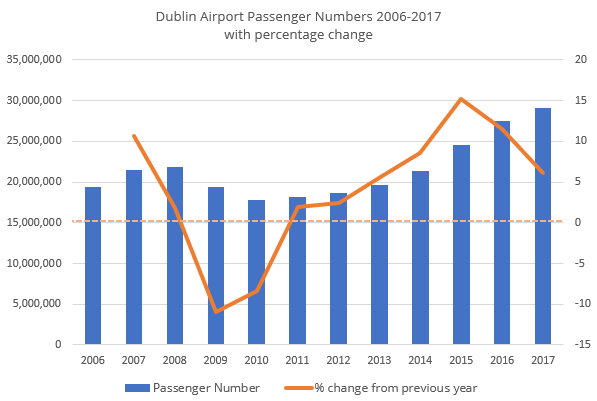 In 2017 the Department of Transport Tourism and Sport (DTTAS) commissioned a review into the future capacity needs at Ireland’s State Airports up to 2050. It is indicated that in addition to considering airside and landside capacity issues the study will look at options around the type, financial/regulatory structures, timing and location of any future terminal at Dublin Airport.

With regard to recent trends and growth, we invite you to consider the following questions: