Our climate is changing rapidly and the effects on the country and on our lives is becoming more evident. Such effects of climate change include a rise to the average air and ocean temperature which results in extreme weather events, rising sea levels, occurrences of drought and increased rainfall. The response to the effects is wide ranging and have economic, environmental and social costs associated with them. The business as usual model cannot continue and there is a need to reconsider the approach to the way we live our daily lives in terms of reducing the impacts of climate change, human activities are increasingly influencing the climate and the earth's temperature.

The next Development Plan has an important role to play in helping Ireland realise its potential to be a low carbon society and mitigating the impacts of climate change. In terms of climate change and land use planning the Development Plan plays an important role, by guiding the sustainable growth of the county, encouraging more compact mixed-use development and greater use of sustainable transport options such as cycling, walking and public transport, restricting development in areas that are at risk of flooding or coastal erosion and protecting the natural landscape and biodiversity.

Irish policy began to address reductions in national greenhouse gas emissions from 2005 onwards. The rate of emissions reduction was modest up to 2008, with efforts to decarbonise hampered by strong economic activity. From 2008 there were reductions in emissions. However, this was a consequence of the economic recession and the resulting reduced employment, consumption, and travel as against policy design. The improved economic outcomes and outlook in recent years has seen emissions gradually grow once more, demonstrating that Ireland has failed to break the link between emissions and growing prosperity.

In recent years, a range of policies and actions have been developed at global, European, national, regional and local levels. The National Climate Action Plan published in 2019 acknowledges the key role that land use and spatial planning can play in ensuring that population growth is managed in a sustainable way, thus reducing our carbon footprint.

Both the National Planning Framework (NPF) and the Regional Spatial and Economic Strategy (RSES) establish the importance of addressing climate action. The National Planning Framework includes National Strategic Outcome No. 8 to ‘Transition to a Low Carbon and Climate Resilient Society’ and at a regional level, the Eastern and Midland Regional Assembly’s Regional Spatial Economic Strategy outlines climate action as one of the three key principles underpinning the Strategy in line with national policy. Climate Action is a key theme that runs through both documents, and in particular the need to promote sustainable and compact growth.

Fingal’s urban and rural geographic and demographic characteristics make it vulnerable to certain risks. As a rural environment, Fingal is home to agriculture, horticulture, equine industries, centres of food production and agri-food businesses. A changing climate can result in an increase in climatic events and will put Fingal’s rural environment at risk. Risks associated with climate change in urban environments are exacerbated, which means we need to assess the impacts of not only extreme weather and climatic events, but also climatic trends, such as urban flooding, sea level rise and increasing temperatures. These events and trends should not be considered as independent, as they influence each other. The slow, gradual increase in temperatures and sea level rise will contribute to the increased frequency and intensity of extreme weather events and flooding.

The current Development Plan is underpinned by the principles of sustainable development, climate change adaptation, social inclusion and high-quality design.  The Plan contains adaptation and mitigation measures and actions to address Climate Change and Fingal County Council recognises the need for the development of a robust strategy to increase climate resilience. The importance of factoring climate change adaption measures into the Development Plan is recognised in the current Plan and it has regard to the National Climate Change Adaptation Framework, Building Resilience to Climate Change (2012), which requires the integration of adaptation and mitigation measures.

As part of the response to climate change, Climate Action Regional Offices have been established and Fingal sits within the Dublin Metropolitan Region. The Dublin Metropolitan Climate Action Regional Office (CARO) is one of four regional climate change offices that have been set up in response to Action 8 of the 2018 National Adaptation Framework (NAF).

In order for Fingal County Council to achieve these targets, this Climate Change Action Plan sets out the greenhouse gas emission levels in the County and the current and future climate change impacts, through the development of mitigation and adaptation baselines. It also examines the future impacts that climate change may have on the region and then sets out a first iteration of actions that will be used to reduce the source and effects of these impacts.

Fingal County Council has prioritised the promotion of Active Travel as part of our ongoing commitment to Climate Action with the creation of the Environment, Climate Action and Active Travel Department, which will have responsibility for mobility planning and the delivery of the National Transport Authority’s cycle network within the county.

We are developing a network of high-quality greenways as part of our wider sustainable transport infrastructure programme. These greenways will improve quality of life for our residents as they will increase the numbers of people who will chose to cycle and walk thereby reducing private car use and lowering carbon emissions, improving air quality levels and reducing congestion.

Key Issues for Next Development Plan

The factors that contribute to climate change as well as its effects are wide ranging and relate to a significant number of other issues that will be informed by the next Development Plan. Climate Action must be a central theme and an ever-present factor/principle throughout the next Development Plan. The provision of well serviced neighbourhoods will ensure permeability and an attractive walking and cycling environment which will reduce reliance on cars and ‘help’ climate change.

The Fingal County Council Climate Change Action Plan 2019-2024 concentrates on two approaches required to tackle climate change. The first, mitigation, consists of actions that will reduce current and future GHG emissions; examples of these include reductions in energy use and switching to renewable energy sources. The second approach, adaptation, consists of actions that will reduce the impacts that are already happening now from our changing climate and those that are projected to happen in the future. These include flood protection, reduced impact of rising sea levels, increased resilience of infrastructure, and emergency response planning. 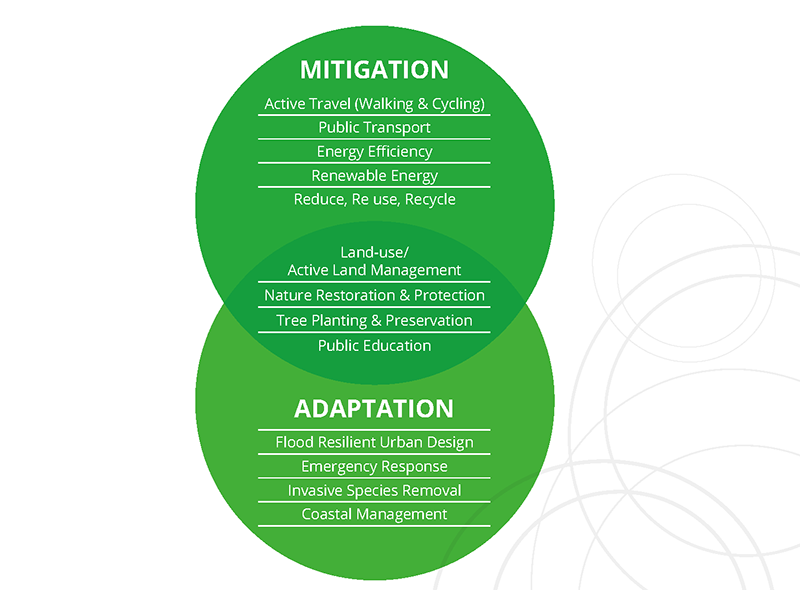 The Fingal Development Plan 2023 – 2029 will need to adopt this approach when responding to climate change through climate mitigation and climate adaptation. The next Development Plan will play an important role through the implementation of its policies and objectives to help address mitigation and adaptation requirements and move towards a low-carbon, resilient County.

The Fingal Development Plan 2023 – 2029 will build on the five key areas which feature in the Climate Action Plan - Energy and Buildings, Transport, Flood Resilience, Nature-Based Solutions and Resource Management - and focus on evidence based and spatially appropriate policies. The Plan must influence a reduction in carbon emissions and the negative impacts of climate change by promoting compact urban growth and sustainable transport as well as measures to minimise coastal erosion and flooding, enhance green infrastructure and biodiversity, minimise energy use, promote energy conservation and use of renewable energy sources. The Plan must provide for effective management of our resources to ensure that our carbon footprint is reduced. 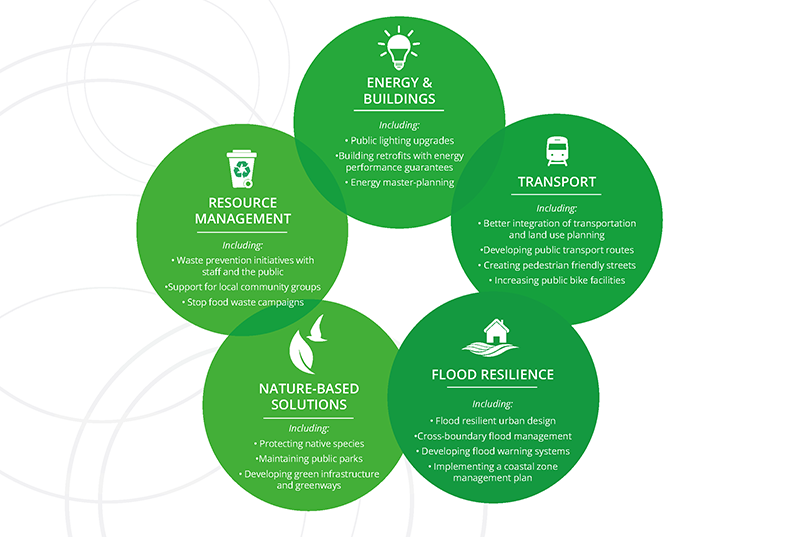 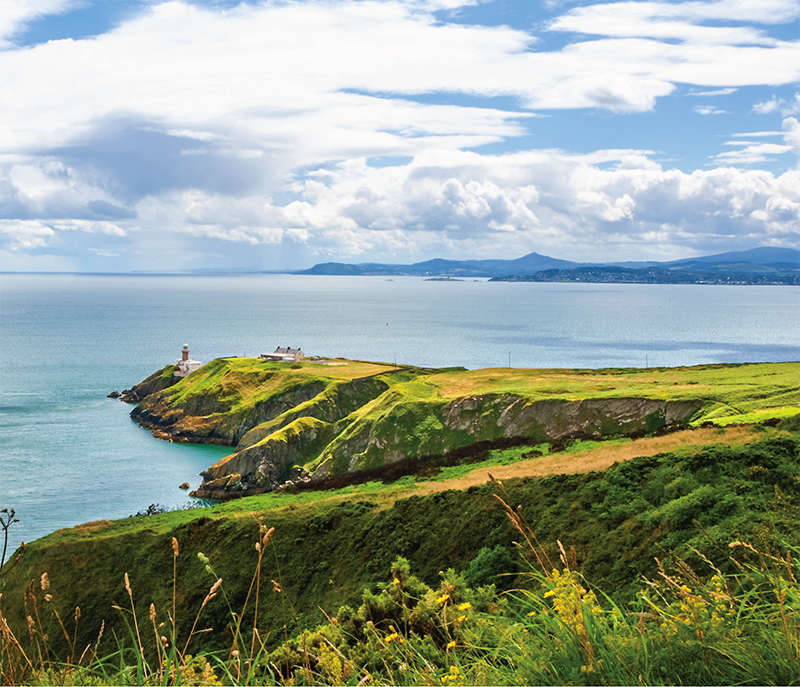 46 submissions have raised observations relating to this chapter