As Dublin Airport is the principal access point for passengers and freight arriving in Ireland, it is essential that the external road network is developed to facilitate a balanced and appropriate response to the challenges that future planned development at Dublin Airport will bring.

The primary route for vehicular access to Dublin Airport by road is via the M1 and M50 motorway network. The M1, M50 and Dublin Tunnel form part of the TEN-T network which provides vital connectivity between key strategic national transport corridors. Additionally, the R132 Swords Road provides access for a large number of bus services and also serves as a secondary general access traffic route to Dublin Airport, including for pedestrians and cyclists.

Since the previous Dublin Airport LAP was adopted in 2006, considerable road network improvements have been implemented that provide for improved access to Dublin Airport such as the M50 Upgrade (Northern Section) to provide free flow junctions between Junction 3 (M1) and Junction 6 (N3/Blanchardstown), the opening of the Dublin Tunnel in 2007 and the M1 Widening Scheme between the Airport and Drinan in 2011. The M1 and R132 meet at the Airport Roundabout, a signal controlled roundabout junction from which traffic leaves the national and regional road network and enters the internal road network of Dublin Airport.

8.2.2 BOTTLENECKS ON THE ROAD SYSTEM

The National Planning Framework lists a number of National Strategic Outcomes that will, if implemented, deliver benefits across the Country. The objective of High-Quality International Connectivity recognises that there is a critical need to facilitate the operation and future development of critical infrastructure such as Dublin Airport whilst the Enhanced Regional Accessibility objective recognises the need to ensure strong connections from the regions to Dublin. The achievement of these objectives will be facilitated by ensuring that the road network serving Dublin Airport remains efficient and effective for both passengers and staff.

At present, the existing national road network in general, and the network serving Dublin Airport and its environs on the eastern side of the Airport campus, such as the M1, M50, M1/M50 and Airport Roundabout, are operating at or close to capacity for large parts of the day. Additionally, road access to Dublin Airport is heavily dependent on the M50/M1/Airport Roundabout route. With such heavy reliance on one particular routing, there is a lack of redundancy and resilience in the road access network. In practice, this means that small localised incidents can have a disproportionately negative impact on travel to and from Dublin Airport over a large area. 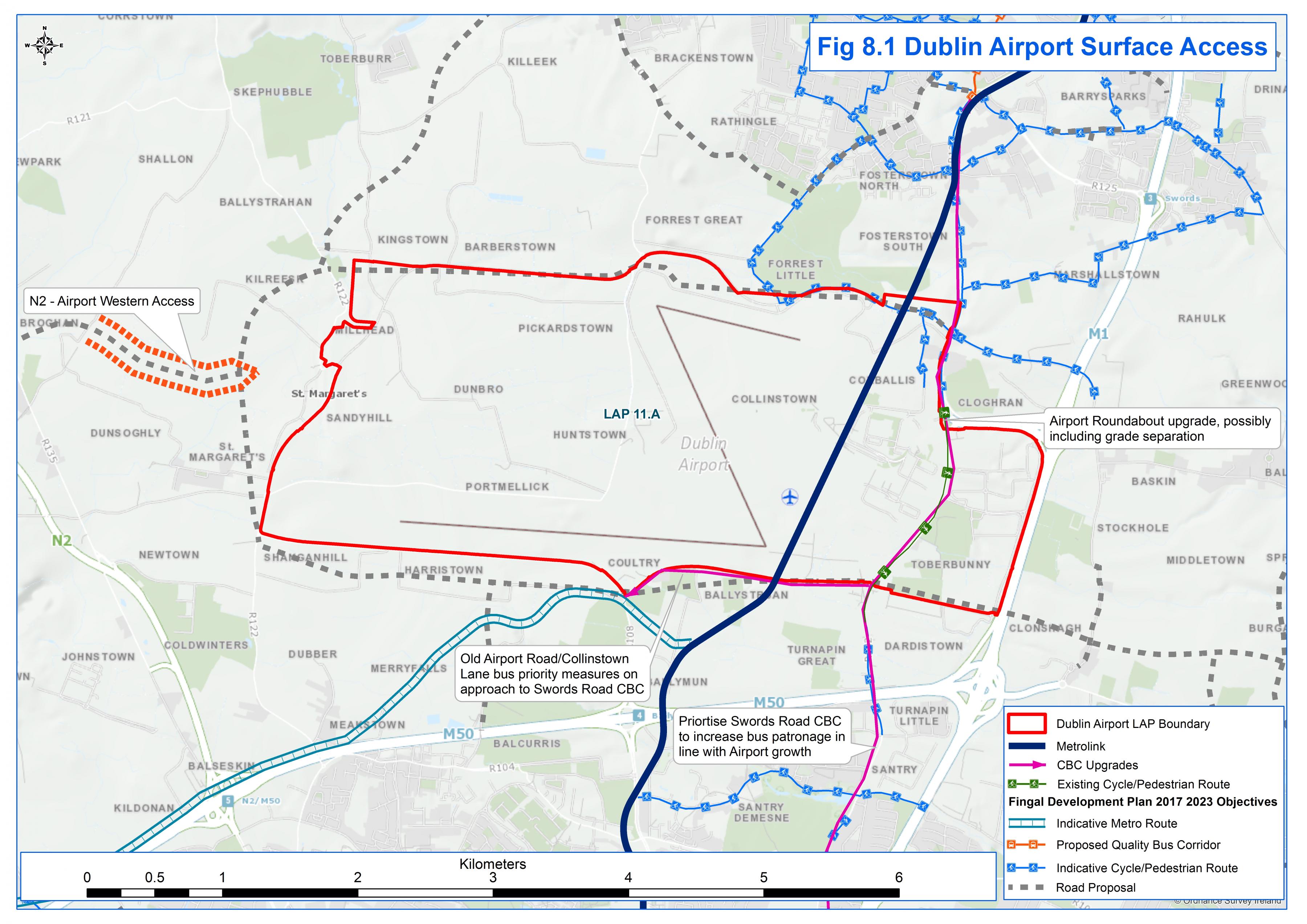 8.2.3 IMPROVEMENTS TO THE EXTERNAL ROAD NETWORK

As Dublin Airport develops into the future it is clear that an alternative road access route is desirable in order to ensure continued efficient operation of the road network. Given the reliance on road access from the eastern side of the campus, there is a strong justification for the provision of a new access route in the medium term serving the western part of the Airport campus with access via a new spur from the M2/N2 corridor. The development of this new surface access corridor will both provide additional resilience for the existing motorway network and serve to reduce the dependency on the eastern access for contingency planning, thereby significantly reducing the potential for incidents on the M1/M50 corridor to negatively impact on access to Dublin Airport. This new route should be provided in addition to the short term provision of extra road capacity on the eastern side of the campus.

Specific road network and associated public transport improvements up to the year 2027 are as follows: 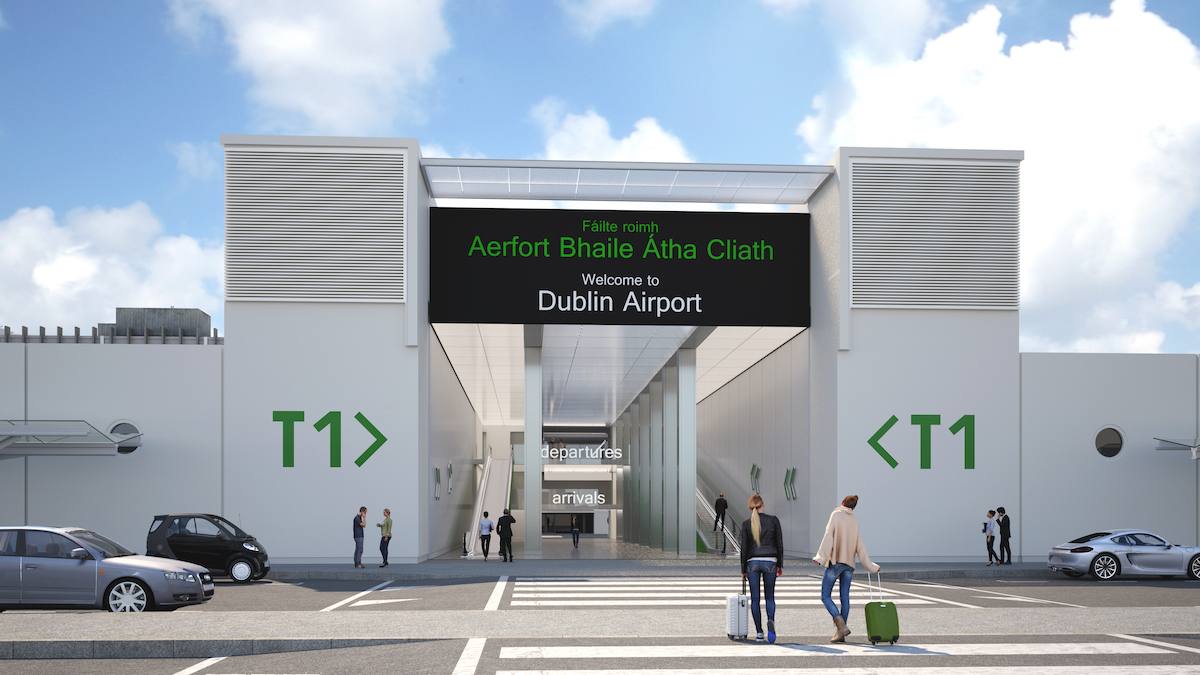 Maintain and protect accessibility to Dublin Airport as a priority and provide for alternative access points to the road network in line with the recommendations of the South Fingal Transport Study.

Ensure that the transport network, including road infrastructure, has the capacity to better arrange traffic in the vicinity of Dublin Airport and to cater for the estimated growth in traffic into the future. This includes the upgrade of the Airport Roundabout to increase capacity, potentially through grade separation, as part of the first proposal to increase surface access passengers where it cannot be demonstrated that public transport provision would satisfy travel demand.

Develop the external road network on a phased and planned basis.

Reserve an alignment for the East West Link Road from Collinstown Lane to Clonshaugh Road.

Provide for a Western Access route to Dublin Airport from the N2 corridor, with consideration being given to the future capacity requirements and development layout of Dublin Airport.

Facilitate the delivery of the R132 Swords Road Core Bus Corridor and to seek its prioritisation as a scheme of strategic national importance in enabling sustainable growth of Dublin Airport in the short-term and in advance of MetroLink.

Ensure proposals for road network improvements in the vicinity of Dublin Airport have regard to the effective operation of the M50 at key junctions such as the Airport Roundabout, M1 Airport Interchange, M50 Ballymun Interchange and the M1/M50 Interchange.

Enable efficient and reliable bus access on the R108 and Collinstown Lane and to ensure this function is provided as part of a future capacity upgrade as appropriate, whilst allowing for any road realignment required as part of Dublin Airport’s runway end safety area requirements and MetroLink portal construction.

Facilitate a contingency strategy and emergency access plan to cater for unexpected incidents on the external and internal road networks in consultation with the relevant bodies.

Develop appropriate signage facilities such as Variable Message Signs in order to cater for unexpected incidents on the external and internal road network.

To maintain and protect accessibility of freight to and from Dublin Airport as a priority in particular with respect to accessibility from the M1, M50 and the TEN-T network for freight movements. Any planning applications for new or expansion of freight and cargo operations within the DA zoned lands shall be accompanied by a traffic impact assessment.